CHECK OUR CALENDAR FOR UPCOMING EVENTS

Click Here to find out more about this new monthly giving program!

Addressing White Privilege
A Statement by 8th Day Center for Justice
“They misled my people by saying that all is well when all is not well. It is as if my people built an unstable wall and these prophets used whitewash on it, not plaster." Ezekiel 13:10

Dr. Martin Luther King, Jr. knew all about “whitewashing” when, in his 1963 Letters from Birmingham Jail, he wrote, “ I have almost reached the regrettable conclusion that the Negro’s great stumbling block in the stride toward freedom is not the White citizens’ ‘Councilor’ or the Ku Klux Klanner, but the white moderate who is more devoted to ‘order’ than to justice; who prefers a negative peace which is the absence of tension to a positive peace which is the presence of justice; who constantly says ‘I agree with you in the goal you seek, but I can’t agree with your methods of direct action’ who paternistically feels that he can set the timetable for another man’s freedom; who lives by the myth of time and who constantly advises the Negro to wait until a ‘more convenient season.’ Shallow understanding from people of good will is more frustrating than absolute misunderstanding from people of ill will. Lukewarm acceptance is much more bewildering than outright rejection.”

It would be a mistake to think that, had Darren Wilson been indicted, justice would have been served. The incident in Ferguson has been a catalyst, but it is far from an isolated case. The killing of black men by police officers is endemic. The anger in black communities is based on the experience of their Michael Browns, their Eric Garners being killed. What is tragic is how, in the rush to bracket, make abstract, and deny racial motivations, we lose track of our basic humanity. Under any circumstance when an officer, sworn to protect and serve, kills a citizen, sadness is fitting. But in place of heartache there was a rush to accusation and justification. This pattern exposes a bedrock of racism that necessitated a response to recent events – a response that reclaims the truth: black lives matter.

One important element in breaking the pattern of racism is to address white privilege. A key step a white ally might begin with is to recognize that racism is not an act but a system. A system that modifies perception so that, by default, white behavior is innocuous and black behavior is suspicious. Whites, even those who can identify with blacks on a class level or who have themselves not done anything overtly racist, are still receiving benefits and imposing burdens from the culture of racism. But, just as people created racism, it can be deconstructed. 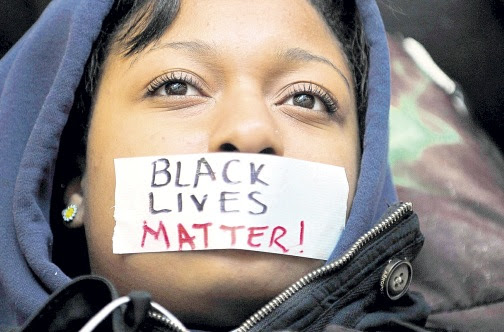 Deconstruction and even hope are present in the growing number of marches taking place in over 30 cities. Speaking to the potential these activities birth, Michelle Alexander said, “I am encouraged by the thousands of people of ALL colors who took to the streets last night in cities across America raising their voices for Eric Garner, Michael Brown and all those who have been killed by the police. The journey will be long and hard if we are serious about transforming this system -- and not just getting a few officers indicted. I pray that the unity, beauty and spirit that I saw in the streets last night will grow and blossom into a long-term, radical movement that will not settle for cameras or a few indictments.”
Here are few suggestions that might continue the transforming efforts:
This is our work. Now is the time!